I feel a deep sense of gratitude as I'm surrounded by good souls.  One hundred and twenty five good men belong to Men's Wisdom Works (MWW).  These men inspire me day after day.

It is though our male lens that MWW members listen to and care about each other.  We leave behind judgment or the attempt to salvage one another. One more thing.  MWW members socialize in force as well.  Our bonds remain strong and continue to grow.

I launched the first MWW group in 2009.  At our first meeting we were admonished to be “Fucking Authentic” by our 87 year old retired psychologist and resident curmudgeon, Albert.  Albert died in 2010, but his words remain burned into the mindset and behaviors of our now 13 MWW groups.  Personal discussions and authenticity guide us to this day.

I am deeply thankful every day.  I'm thankful for the memories and contributions of Albert and the five other MWW members who joined him in the peace of life eternal.  We miss Albert and the 5 other deceased MWW pioneers; Larry, Steve, Stephen, Jules and Murray.  All 6 men made MWW stronger and more meaningful for all of us.

I am especially grateful for every one of our 125 members of Men’s Wisdom Works.  Without their dedication, enthusiasm, and commitment to the men in their group my concept of men helping men would still be but a pipe dream.  Thanks, gentlemen.

Cindy, Drew, Andrea and Greg I’m most thankful for you.  Without my wife, 2 sons, and daughter-in-law, I’d be without inspiration, sound advice, and unconditional love.  Besides many other reasons I owe my profound thanks to my wife, Cindy, for her contributions to the lift off of MWW.  Cindy came up with the name, Men’s Wisdom Works.  Now, 125 men feel fulfilled by their groups and remain bound by our name/your name, Men’s Wisdom Works.  Thanks, baby doll.

Happy Thanksgiving.
Posted by Men's Wisdom Works at 6:55 AM No comments:

I’m struck by two equally powerful forces upon hearing the words “Father” or “Dad”.  Being the age of retirement I now clearly define my own fatherhood by the expression, “Father is the Son of Man”.  Just as I had influenced my dad, my sons continue to illuminate my path.  Drew, Greg and I are getting together in a few days to celebrate our special relationship.

The connection I shared with my dad seemed tricky and somewhat distant to the untrained observer.   Complicated, probably best describes the father/son relationship we navigated.  My dad, Joe, never had it easy fulfilling his definition of fatherhood.  He so struggled to make a living for his family of four.  But through a combination of enterprises he kept us afloat.  His worried expression seldom fell from our view.

My mother was quite attractive, but it seldom came easy for dad to share the intricacies of his life with her given her moods and blast of narcissism.   But, my dad’s devotion and love for his wife still serves as an inspiration and model for me to this day.  They kissed and hugged a lot as do my wife and I today.  We don’t need a reason.  Like my parents, we just do.

When I was a boy of 4, dad needed a diversion from the pressures of work and home.  He found that positive respite in Masonry.   Here’s dad and our family 63 years ago, just before he joined the Fraternal Order. 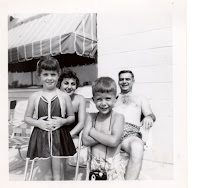 For the many of the next 33 years I resented his frequent evening absences from his family.  What was it about his wife, daughter and me that made it seem like he favored his “Masonic brothers” over us?  I felt abandoned.  My feelings toward him transformed during a long illness I battled in my 20’s.  It was dad who comforted me, encouraged me and supported me.  I had missed the point about his devotion to his family.  Far from abandoned I was loved.  Joe Fink was there for his ill son.  He always was there for me.

A fellow MWW member and Mason, Nevin, told me of the significance of the 33rd degree.  Nevin explained that this degree is based on service to country, family, community, and Masonry.   He told me character was a driving standard of acceptance into the 33rd degree of Masonry.  I never understood the significance that my father made to Masons and his family until my conversation with Nevin.  His service to Masonry was a service to his family because it kept him balanced and happy.

Nevin wondered when my dad died.  I told him 1995.  Nevin asked how many attended my father’s funeral.  I told him it was a bitter cold day in January with 4 inches of snow on the ground, yet more than 250 people attended his funeral.  Nevin just said, “Yes.  Your dad was a 33 degree Mason”.

Before my father died we exchanged powerful words of love.  I gave him a plaque I had made for him honoring his service to Masonry and his love and devotion to his family.  I never saw his tears cascade until that moment.

Then it was his turn a few weeks later.  In his own poignant way he confided, “Son, you are a far better father than I was to you”.  Life came full circle.  As they say, “Son is the father of man.”  It wasn't that I was a better father.  I learned fatherhood from a 33rd degree Mason.  I only hope my sons see their father as half the man their grandfather was.

Often, I’m asked why I started Men’s Wisdom Works.  Truthfully, I was having a difficult time finding meaning in my life after closing my business and retiring.  I needed to talk with like-minded men.  Thus I founded MWW.  But, my inspiration was and is 100% Joe Fink.  I learned from this past Master Mason, that inherent in fatherhood is brotherhood.

Joe Fink, I miss you and I will forever love you.

By the way, dad loved a party.  Here he is in his true colors. 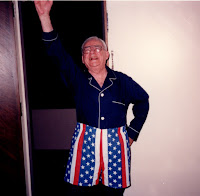 Happy Father's Day to the men of MWW and fathers everywhere.

It’s the second Tuesday of the month and Group VII is again targeting a local pub for their alternate week social get-to-gather.  By 4:40 everyone has arrived and ordered some refreshment and the conversation is beginning to focus on the Sunday game, the status of the election, the recent registration, the recent storm or any number of other essential topics.  The mood is easy and warm with some good-nature jabs, and a clear sense of the affection we feel for each other.  Attendance changes at these gatherings but generally six to eight of the 10 group members show up and it seems like everyone makes an effort to set this time aside for getting together.  The social gatherings seldom last longer than the regular groups on the first and third Tuesday of the month and by 6:30 everyone has bid farewell and is gone. 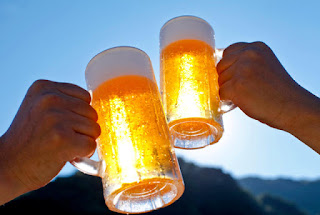 The pattern of regular group meetings with discussions that typically focus on values, issues or immediate concerns of the group or a group member, juxtaposed with weekly social gatherings, has provided our group with a way to stay focused on our original “charter” while including an opportunity for the free form banter and easy conversation that seems to accompany close friendships.  We very seldom need to refocus during regular group meetings and our social encounters have fostered the topic of the next regular group on more than one occasion.

There is more than a small measure of comfort in knowing that this is a group of friends that will be close for the rest of our lives.
Posted by Men's Wisdom Works at 12:57 PM No comments: